skip to main | skip to sidebar

It's been a long few weeks.

Right after I last posted, I was inundated with traffic plan work (good, but tiring), as well as having to do a major dye run to prepare for not one, but three fiber shows in less than 30 days.

I didn't do much other than work and dye (die?). Because the traffic plans are done at the computer, the last thing I wanted to do was to  sit at the computer and blog. Sorry...

In the interim, I've been to 3 shows - 1 very good, 1 so-so, and 1 outstanding. Check out Fiber Voodoo for the complete recap.

I've also traded spinning wheels around - I sold the Country Craftsman (which I still love, but don't need too big, fast wheels), to buy this beauty: 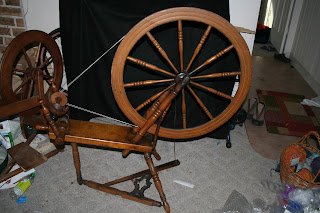 It's a Canadian, tilt-tension production wheel. Presumably made by one of the Vezinas (there are 2 or 3), and while it has some alignment issues, spins very, very fast. I have met my match! With the Ashford in the picture, you can get a sense of the scale. The drive wheel is 29" diameter.

I've also tried and failed to hatch turkey eggs in an incubator. It's hard to get anything better than a 70% hatch rate, and because I had to hold some of them almost a week before putting them in, and having to take the incubator to a friends when I was out of town (it needed water about every 2-3 days), I wasn't surprised. However, 2 of my 3 turkey hens are sitting on a communal nest, and are close to hatching peeps (if they can manage better than I did). I'll be sure to update that soon.

I'm in a photography class, and we have to do homework before this week's session. I went around yesterday with it on auto and took some cool pictures of Mr. Big's feathers and the pavo real (Peacock in Spanish - it means royal turkey).

Tang is doing well, had a little gas the other day, which after last winter's ordeal, I'm a little hyper about, so she got slop with peppermint, and she's fine. I think she got some hay that was a little higher fiber than some in the bale pile. You all know what high-fiber foods do...

I've also added some new stock - a trio of satin rabbits. The copper doe kindled on Mother's day - 7 vigorous kits. She's being a good mom, and protective. The chocolate doe is due on the 21st, so the nest box will go in on Saturday, just to make sure. The buck is a broken Siamese, and looks kind of like a clouded leopard on his back - he's young, so will be ready for the girls in about a month. I won't breed them back that quickly - there's only so much rabbit one can eat! I make killer rabbit tacos - I can't wait!

Leigh emailed me, asking what the baking progress has been. With work and shows, I really haven't been baking at all. However, I'm hoping to very soon. I will post a recipe blog when I get my sandwich bread dialed in. Interestingly, I have psyllium husk on hand - I give psyllium powder to Tang for sand accumulation. I'm just going to use that. I can tell you that it makes her slop (soaked timothy hay pellets) very slimy, so it should work really well to help replace gluten in bread.

Because I love her, here's a candid shot of Tang, licking her salt block - her tongue is very wide... 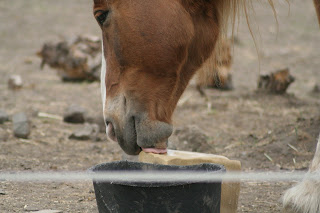 I have been slowly progressing toward a wheat-free existence. This week, I will remove all wheat pasta, flour and wheat containing packaged food that's been hibernating in my pantry, which will remove a big temptation.

I've had successes in baking, one thing that I'm very fond of. Last month, for a spinning get-together, I made a pumpkin spice cake, substituting GF flour for the regular. It was a hit. I was stoked - I can DO this!!

So with the addition of GF pasta, life was swimming along, with an occasional lapse, until yesterday, when I attempted to make GF red velvet cupcakes for the next spinning gathering. The first recipe was an actual Red Velvet recipe, and encouraged by my previous substitution success, just made it with GF flour.

They fell, the stuck to the wrappers, and after addition of additional flour and oiling the wrappers, they tasted funny (like the food coloring, of which you use a lot). Knowing that I would/should not eat 4 dozen substandard mini-cupcakes, I took them to the birds. 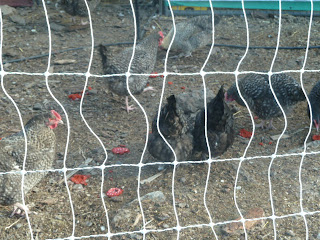 The chickens weren't too sure about these red things flying into their pen, until I cracked them open. 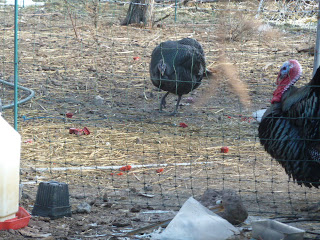 The turkeys weren't as shy (Mr. Big was "protecting" his girls from the flying red missiles). 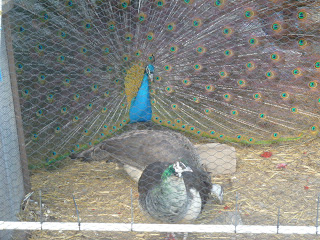 The peafowl were interested, with the peacock taking the opportunity to "impress" the hens.

Back to the drawing board. I searched out a GF recipe and settled on a white cupcake recipe that I modified by adding cocoa and red food coloring. The were topped with cream cheese icing. 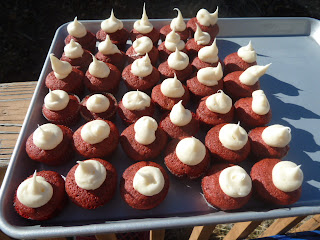 Success!! They are a bit dry, but I will tweak them further by adding a little more moisture and more cocoa to boost the chocolate flavor (it was very subtle). I only came home with 2, which were last night's desert.

The local weaver's guild meeting is Wednesday, and I'm one of the hostesses. I'll be bringing another load of these to the meeting, with the addition of little flat heart candies on the top.

I need to work on a good bread recipe - I have "The Gluten-Free Gourmet Bakes Bread," but a lot of her recipes use bean flour, which I'm sure works, but I'm a little leery of it, because, well,  you know what beans do... I'd rather my bread didn't do that. The addition of soaked psyllium husks or chia or flax seeds produces a "slime" that helps with replacing the gluten's action in breads - I'll try that first.

Happy Valentines Day!
Posted by Laura at 8:18 AM 4 comments:

My Stock pile has gone up!

You may remember from my previous post that I had started it using butter, onions, roasted garlic, celery seed (I don't like Celery), and a bit of Poultry Seasoning.

I ended up simmering the stock for 36 hours, topping up the water twice. I also had returned the roasting pan to the oven, and put the resulting brown wonderfulness into the stock too. So, I needed to cool it quickly, as I had somewhere to go, and I needed to skim off the fat.

I started in the sink, but there wasn't enough water surrounding the pot to absorb enough heat. But, hey - I have a bathtub! So I put the stock pot in the bath tub and filled it with cold water. In less than 20 minutes it was cool. Since I don't have enough room in the fridge for a big pot like that, I hit on the idea of using Mother Nature's deep freeze.

Because life happens, I didn't get to canning until yesterday, but the stock was still in the "safe" temperature zone, in spite of our warming trend (almost 50 degrees yesterday!).

After skimming the stock, I put it into a ginormous canner that was my mom's, and added the frozen stock from the Thanksgiving Turkey. It took awhile for the stock "ice" cubes to melt, but when they did, and I had a nice simmer going, I started up the pressure canner and started filling jars.

My canner will hold 7 quarts or 14 pints at a time. I chose to can quarts, as I use stock frequently for soup base, and a pint just isn't enough! It's been awhile since I used the canner, so in preparation, I had the local Extension Service check the gauge - it was right on. I also had to call a friend (Belinda, who got me started on pressure canning several years ago) to be reminded what to do next!

The process was interrupted by a meeting, so when the first batch was done, I just turned it off, and left the stock in the big canner on simmer. I came home and by 10:30 I was done with 12 more quarts.

My total was 19 1/2 quarts. There is one pint in the fridge that I'll use for rice or quinoa. 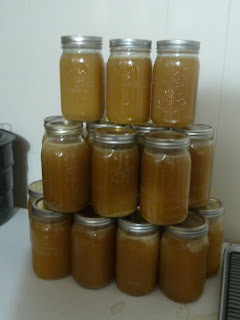 I'm feeling very secure in my larder right now, and this stuff is awesome. It's very rich, both in color and in flavor. I'm a firm believer in roasting bones before making stock, now. I think the amount of fat also affected the flavor, though it was completely skimmed before canning.

I still have 6 quarts of "proto-stock" - canned bones and chicken wings from several years ago, that I was using until now. It's good to have back up...
Posted by Laura at 8:47 AM 3 comments:

Laura
Central Oregon, United States
I'm a late 50-something person with widely divergent musical taste, hobbies including fiber arts, dressage and reading, who is in transition between a farm and future retirement - still have chickens and ducks and one horse.